Higher Than Expected Sales of Oculus During Last Year

A few years ago, Facebook took over Oculus in a $2 Million deal. Facebook has always been very private about the sales figure of the Oculus, but at the same time, you can see the growing popularity of Oculus. In addition, very recently, Facebook also rebranded itself as Meta or Metaverse. This means that the company is not just focusing on social media anymore, but the company is focused on virtual reality.

It means 3.5 million Oculus units estimated to have sold in 2021 and also IDC estimates that unit sales of the company’s VR devices in 2021 will be in between 5.3 million and 6.8 million 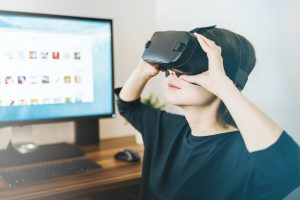 In one of the articles in The Wall Street Journal, Dan Gallagher talked about the growing adoption of the Oculus VR Headset. The IDC estimates that as many as 5.3 million to 6.8 million Oculus VR Headsets will be sold in 2021. Again, it is difficult to get the correct number since the Meta is not public about the sales figure. However, this is a huge jump considering that 3.5 million Oculus headsets were sold last year.

An analyst for KeyBanc Capital also mentioned in one of the reports that there was a huge jump in downloads during the Christmas season. With as many as 90% active users, you can estimate the level of adoption. If you look at the estimates from the last year, you will notice that the sales are much higher than the actual estimates. It is a popular purchase, especially during the Christmas season.

The most popular VR headset from Oculus is the Meta Quest 2, and the popularity is attributed to a fully wireless setup. This headset has a resolution of 1832 x 1920 per eye. This translates into 3.5 million pixels, which is 50% more than the previous generation Oculus Headset which also needed wires to transmit signals. The Oculus Quest 2 also has an inbuilt battery, and the backup time is good enough to offer you hours of gaming. The brand also offers multiple accessories with Oculus, which can further improve your gaming experience.

If the sources are believed, the Oculus is working on a more powerful headset that may sell parallel with the Meta Quest 2. This may be the Pro version of Oculus Headset. The sales figure for the Oculus headset is expected to rise further, and people are surely interested in VR games because of the more immersive experience it offers. The next year IDC estimates may be even higher for the Oculus, and it may beat some of the top-selling gaming consoles in the market.