The Teardown: Should You Buy An Emporio Armani Watch? 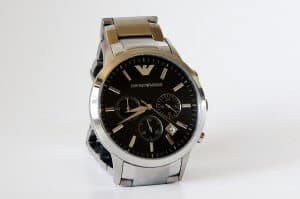 The company has been around for decades, and as an established brand in fashion, the Italian household has firm roots in many industries that lead the world market today. What makes a great company is not only the quality of their products but the history behind the ideology that surrounds their resolve to create outstanding pieces of art.

It will surprise you at how Emporio Armani has deviated from the expensive and high-end luxury cost of wearing their clothing line. These watches have all the elegance and sophistication that their brand exemplifies without the hefty price tag of their other product lines.

The History of Armani

Emporio Armani is part of the Armani group, which has brought many timeless fashion items to the world. The one and only Giorgio Armani founded the company back in 1975, intending to produce fashionable items with a timeless beauty that has global appeal. The Armani group has expanded its resources and influence to many industries, making it an international success.

The Emporio Armani is a branch of the group that focuses on modern characteristics of the latest trends. The collection is often assumed to be influenced and directly observed by Giorgio Armani himself. That speaks volumes about how important an Emporio Armani Watch is to the company.

How Are Emporio Armani Watches Made?

The literal definition of “Emporio Armani” is a watch made for fashion, so this product’s quality and handling is on par with the more expensive entries in their production. With the target market being young adults from ages twenty to thirty, Emporio Armani has had an overall positive impact on the industry.

Affordable, elegant, and timeless in design, you can’t find any other watch quite like an Emporio Armani. Their manufacturing line is based in Switzerland, a country that prides itself on quality control and perfection. However, Fossil is the outsourced manufacturing client of Armani, which has factories in Hong Kong.

The Armani group doesn’t have the knowledge and expertise of other watchmaking brands, so they only oversee the designs for their watches and leave the manufacturing and engineering to their partners. So, the Fossil group was chosen to be their manufacturing branch.

Emporio Armani watches are marketed as fashion items, thus putting them below known luxury brands, like Rolex. This isn’t necessarily a negative connotation, as it only means that they can lower the price significantly while making them on par with expensive competitors.

The watches from Armani are sometimes compared to Gucci or Boss and their inexpensive units compared to Guess, Diesel, or Michael Kors. These brands can be commonly found in department stores or from retailers. Its reputation still stands as a high-end Italian fashion brand, and its dedication to timeless beauty is unparalleled.

Emporio Armani watches are also popular among the female market, having many positive reviews on popular websites like Amazon. Some customers have said that Armani watches are the best Chinese made products they’ve bought in a while in their studies.

These people have also said that they didn’t buy an Armani watch because of technicalities, such as gears or movement. Still, because of luxury appeal, the brand suggests without having to spend a pretty penny. That’s what makes an Emporio Armani so irresistible, the reputation the brand brings along with their quality at an inexpensive price point.

Whatever taste you have in searching for your next watch, an Emporio Armani watch will surely catch your eye upon browsing through catalogs. The thirst for elegance and beauty doesn’t have to amount to months of hard-earned salary but can also be a moderately priced timepiece with no compromises on quality and design.

How Do You Create Barcodes?

Educating Your Clients on ADA Compliance

Guide to choosing a managed IT support provider

Which Bitcoin Wallet is safe for you, in which you can keep your bitcoins safe?