The calculation of both horizontal and vertical directions of the cricket ball in one single equation becomes difficult. The division of the velocity vector into two components turn one difficult problem into two easier problems. The breaking of vectors into components will work for vectors like forces, momentum, electric field also.

How to break a vector into components? 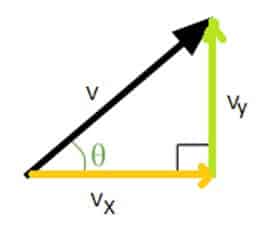 V in these formulas is the magnitude of the total velocity vector which is a positive value. The components Vx and  Vy can be negative if they are pointing in the negative direction.

Determining the angle and magnitude of the vector?

Let us see how vector magnitude and angle can be calculated if the components vx and vy are known. Applying Pythagorean theorem we can find the magnitude of the total velocity vector.

By taking the square root, we get the magnitude of the total velocity vector in terms of the component.

If both the components are known the angle of the velocity vector can be calculated using tanθ.

What is an accelerometer?

How does an accelerometer work?

The other form of the accelerometer is the piezoelectric effect accelerometer. They have microscopic crystal structures that get stressed due to accelerative forces.

Connecting to an Accelerometer

Accelerometers will communicate over an analog, digital or pulse-width modulation connection interface.

Pulse- Width Modulation(PWM): Accelerometers that output data over pulse-width modulation (PWM) output square waves with a known period, but a duty cycle that varies with changes in acceleration.

Accelerometers are low power devices. The voltage required is 5V or less and the current requirement is microampere or milliampere range. The current consumed by an accelerometer depends on the settings.

9 ways a digital marketing agency can help your business

3 Things to Do Before Relocating Your Business

How to Get a Loan With Bankruptcy on Your Report

9 ways a digital marketing agency can help your business

3 Things to Do Before Relocating Your Business